The Ingame Console can be opened using F1, unless you modify config.json to change the Key binding. It can be used to manage script loading/unloading and is extended by custom Console Commands from Scripts. 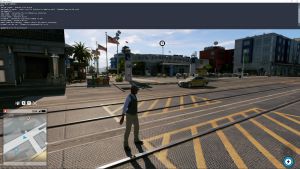 Prints a full list of available commands, including custom commands from Scripts.

Loads a Script by name. The [script] parameter refers to the Script's directory name below data/scripts.

The Trainer provides console commands to interact with the game's world.